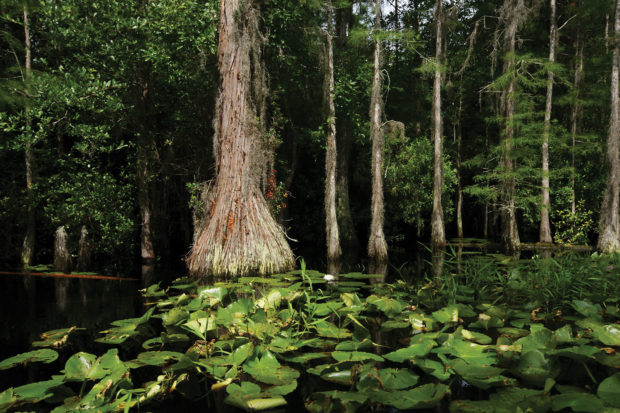 Bald cypress trees and water lilies grow in the Okefenokee Swamp, a wetland of international significance that could be irreparably damaged by a proposed strip mine.

If approved, a proposal to mine titanium and zirconium in southern Georgia will threaten the integrity of the Okefenokee Swamp, designated a Wetland of International Importance through the Ramsar Convention. Ninety percent of the massive wetland lies within the Okefenokee National Wildlife Refuge, which encompasses 353,981 acres of designated wilderness. The Osceola National Forest guards the southern flank of this invaluable ecosystem at the Florida state line. Combined, these federal lands protect 600,000 acres of wetland forests that are home to multiple endangered species.

Alabama-based Twin Pines Minerals withdrew its original proposal to mine 8,000-acres within a few hundred feet of the Okefenokee when the U.S. Army Corps of Engineers determined that the National Environmental Policy Act requires an environmental impact statement (EIS). The mining company then submitted a proposal for a 582-acre “demonstration” project to avoid the more stringent EIS review.

The Trump administration subsequently rescinded Obama-era wetlands rules, stripping federal protection from much of the wetlands in question and relegating permitting authority to the Georgia Environmental Protection Division. The state agency is expected to initiate a 60-day comment period soon, after which it will make its final decision on the proposed strip mine, which would dig into Trail Ridge about 3 miles from the national wildlife refuge. Trail Ridge acts as a semi-porous dam along the eastern edge of the Okefenokee, holding the swamp in place but allowing complex water flows through layers of soil dating to the Pleistocene Epoch, sometimes called the Ice Age, which began almost 2 million years ago.

In addition to recognizing the hydrologic complexity of this ancient wetland, the U.S. Fish and Wildlife Service (FWS) touts the value of the Okefenokee’s extensive peatlands, which extend to depths of 15 feet, storing more than 95 million tons of carbon dioxide and representing almost 10,000 years of natural evolution. The FWS also notes that peatlands cover just 3% of the world’s land area but “store more than twice as much carbon as the world’s forests. … When peatlands dry, carbon dioxide is released into the atmosphere, so it is critical for these areas to remain waterlogged.”

Opponents believe the strip mine would irreparably alter the geology of Trail Ridge and drain thousands of acres, thereby destroying critical fish and wildlife habitat and releasing millions of tons of carbon dioxide when the peat dries out. One opponent, Defenders of Wildlife, has documented Twin Pines’ track record of “flagrant disregard for environmental safeguards” and the company’s illegal construction of staging areas for the proposed mine.