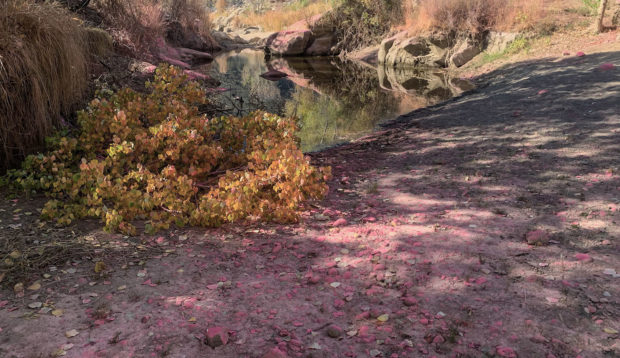 Phos-Chek fire retardant stains the ground and plants pink on both sides of Sespe Creek in the Los Padres National Forest. Forest Service officials acknowledged the "misapplication" of retardant during the 85-acre Howard Fire but claimed the action was justified to protect hikers and hunters in the area, even though fire conditions were mild and water would have served the same purpose (photo by Peter Deneen).

Alex Wilson, reporting for VC Reporter, recently covered our lawsuit against the Forest Service challenging its use of aerial fire retardant.

He writes, “When environmental activist Andy Stahl heard that last month’s battle to extinguish the Howard Fire in the rugged mountains north of Ojai resulted in an airplane dropping fire retardant into Sespe Creek, he knew the incident would figure into a lawsuit he was already preparing to file against the U.S. Forest Service.”

Andy told Wilson, “That’s a Wild and Scenic river in the middle of a wilderness area and critical habitat for endangered species. I mean, you can’t get much more ridiculous than that. … It happened, coincidentally, that the fire was being fought at the time we filed the lawsuit and it somewhat catalyzed the case.”

According to Wilson, USFS officials claimed, “The Phos-Chek drop that impacted Sespe Creek last month was ordered to protect numerous hikers and hunters in the area who were eventually evacuated by a Ventura County Sheriff’s Department helicopter” — i.e., “numerous” evacuees evacuated by a single helicopter.

“It’s a really good illustration of the silly use of fire retardant in a place where that fire wasn’t threatening anything,” Andy told the reporter. “That’s in a wilderness area. It was not a hot, windy day. The fire could have been suppressed with water. Water is not toxic. Water does not kill fish. Retardant is toxic and it kills fish.”

Wilson reported that the Forest Service report on the incident acknowledges “misapplication” of fire retardant.

“There can’t be a clearer cut case that we don’t dump toxic pollutants in Wild and Scenic rivers in wilderness areas where we have endangered fish and endangered species,” Andy said, characterizing the retardant dump as happening in “the worst possible place.”

Wilson also quoted from our court filing: “The Forest Service’s discharges of retardant pollutants into waterways from aircraft point sources is continuous, on-going, and unpermitted, in violation of the Clean Water Act,”