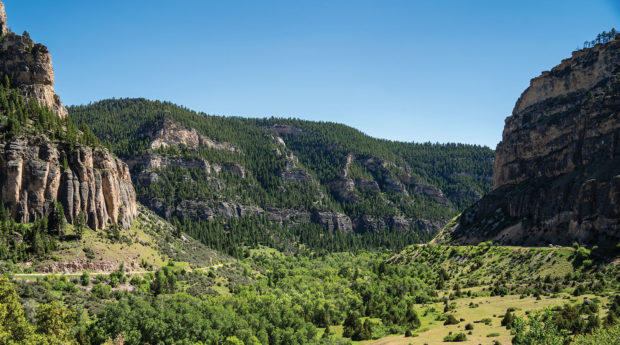 Tensleep Canyon lies in Bighorn National Forest, where officials had proposed aerial herbicide spraying to eradicate native plant species. After FSEEE objected to the plan, it was withdrawn from consideration.

Angus Thuermer with Wyofile and Alex Hargrave with the Buffalo Bulletin reported on our protest that helped convince Bighorn National Forest officials to drop their plan to spray toxic herbicides to kill native sagebrush and larkspur.

As noted by Hargrave, the Forest Service is updating its Invasive Species and Other Plant Management Plan and had proposed implementing aerial spraying to attack native species — sagebrush and larkspur — as part of its strategy for controlling invasive species. FSEEE objected to the plan, along with Bighorn Audubon Society, Council for the Bighorn Range, the Western Watersheds Project, the Bighorn Native Plant Society.

Thuermer reported, “Following a hearing with five groups that objected to the plan, Forest Service Deputy Regional Forester Jacque Buchanan told them native plants would no longer be targeted. In exchange, the groups … will agree to drop their objections. … The plan called for burning and mowing sagebrush as well.”

Hargrave quoted Forest Supervisor Andrew Johnson: “Even though prescribed burning is our preferred tool, it’s a hard one for us to use,” he said. “So we were looking at using herbicides, just as an additional tool in the toolbox. And we have done that in the past on a smaller footprint of the forest. We just need to do some more homework on figuring out how and if we want to do that at a broader scale.”

While Johnson’s old saw of having more tools “in the toolbox” may seem like a reasonable excuse for using toxic chemicals on our public lands, it actually reinforces FSEEE’s position that the Forest Service needs to redirect resources to favor prescribed fire.

Hargrave, however, gets a couple of things wrong, including his assertion that “duncecap larkspur is poisonous to cattle once its purple flower blooms.” He is correct that the native plant “is therefore considered a noxious weed in Johnson County,” but the best available research shows that larkspur is not always poisonous to cattle and that its toxicity in the Bighorn Mountains is “unknown.”

As reported by Thuermer, larkspur “helps sustain broad-tailed hummingbirds and other wildlife.”