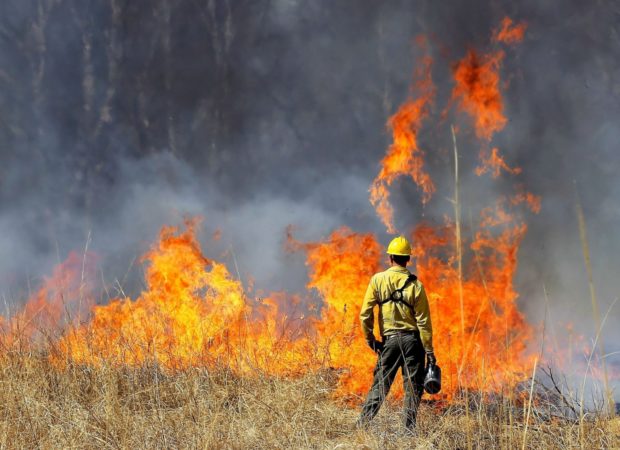 After igniting a prescribed fire, a forester observes the flames.

The wildfire crisis in the West represents one of the most significant issues that the Forest Service must address. Climate change frequently gets a large share of the blame, as does the Forest Service 100-year policy of suppressing all fires “by 10 a.m.,” thereby allowing Western forests to grow denser stands of weaker trees that are more susceptible to drought and insect damage — fuel for bigger, more intense wildfires, according to the generally accepted narrative.

Many foresters and timber companies claim mechanical thinning and tree harvesting can help restore forest health. But even if cutting trees were proven to be an effective approach to wildfire mitigation, the massive amount of forested land in question dwarfs the U.S. capacity for mechanical “forest treatment,” even with the additional $5.5 billion in Forest Service funding from the Infrastructure Investment and Jobs Act (IIJA). Scientific consensus calls for prescribed fire to address the problem, but on April 6, the Forest Service started a prescribed burn in Santa Fe National Forest that quickly grew into the catastrophic Hermits Peak Fire, the largest wildfire in New Mexico history, raising serious questions about prescribed fire.

The use of prescribed fire in North America predates the arrival of Europeans. Environmental archaeologist Christopher Roos studies ancient fires — patterns, frequencies, and intensities — to understand the role Native Americans played in forest management. Roos and his colleagues published a study in 2020 that examines how various types of fire management have affected the forest ecosystem at Wabakwa, an archaeological site in northern New Mexico not far from where the Hermits Peak Fire burned.

Located in a fire-prone ponderosa pine forest in the Jemez Mountains, Wabakwa was occupied by Ancestral Puebloans from around 1140 to 1470 CE and provided an ideal site to study the northern New Mexico ecosystem prior to the Forest Service era of fire suppression. Roos and his team’s dendrochronology analysis in and around Wabakwa revealed three distinct fire patterns corresponding to Ancestral Puebloan habitation (1100-1650 CE), a post-habitation “free-range” fire period (late 1600s to late 1800s), and the federal fire-suppression era (late 1800s to present).

Roos and his colleagues determined that, while Wabakwa was inhabited, the area was characterized by a patchwork of small, frequent fires, which would have been set by the inhabitants as part of their subsistence and cultural activities. After the inhabitants departed, the patchy fires around Wabakwa stopped, and the site was characterized by widespread, low-level wildfires, a pattern consistent with other ponderosa forests, where wildfires occurred naturally at approximately 15-20-year intervals.

The last recorded wildfire in the study area occurred in 1893, and from that time to the present — a period characterized not only by fire suppression, but also by logging and livestock grazing — Roos and company documented significant changes in forest structure. The absence of low-intensity fires allowed the forest to grow denser. Combustible materials — leaves, needles, downed branches, etc. — increased significantly during this period, creating fuel loads “unprecedented in at least the 880 years since Wabakwa was established in 1140 CE.”

The work of Roos and his colleagues shows that fire is critical to a healthy northern New Mexico ecosystem, and other researchers have documented similar findings across the West. The Forest Service faces a challenging paradox. Unprecedented fuel loads increase the risk of catastrophic wildfire, but fire affords the only possibility of reducing those fuel loads at the required scale. Ending prescribed fires is not an option.

Still, questions raised by the Hermits Peak Fire persist. Answers to those questions point to problems within the Forest Service. For example, the Forest Service “Incident Overview” posted on InciWeb, claims, “Forecasted weather conditions were within parameters for the prescribed fire” and “unexpected erratic winds in the late afternoon caused multiple spot fires that spread outside the project boundary.” But the National Weather Service had issued Red Flag warnings for the region, indicating that the combination of temperature, humidity level, and wind would increase regional fire danger on the day the prescribed fire was ignited.

Rep. Teresa Leger Fernandez represents the congressional district hit hardest by the fire. In a letter to Forest Service Chief Randy Moore, she wrote, “Northern New Mexico had an extremely dry winter, is in a prolonged drought, and is currently experiencing a warm spring with erratic winds. … These conditions are not rare during spring in New Mexico. I, and many in the local communities, were shocked that the Forest Service would perform a prescribed burn during these conditions.” The Forest Service conducted an internal review of the Las Dispensas Prescribed Fire, which became the Hermits Peak Fire. That self-assessment offers some interesting insights, beginning with Chief Moore’s claim that climate change “is leading to conditions on the ground we have never encountered,” a claim that Fernandez’ letter refutes.

Further undermining the climate change excuse, a scientific report published in 2007, Medieval Drought in the Upper Colorado River Basin, concludes that “multi-decadal droughts” have been common in the Southwest during the past 1,260 years, including one that persisted for “about six decades … in the mid-1100s.” Even without the effects of climate change, current drought conditions are not unprecedented, as Chief Moore has suggested, and for 15 years, the Forest Service failed to incorporate this knowledge into prescribed fire policies.

The Forest Service review also states, “The review team found that the personnel assigned to the Las Dispensas Prescribed Fire followed their approved prescribed fire plan.” That an approved plan ignited the largest wildfire in New Mexico history demands a serious critique of Forest Service policies and procedures, but this internal review does not qualify as that critique. In fact, the Forest Service report reads like a combination of distractions and weak excuses.

The review blames “competing obligations” that “limit the ability of the workforce to prioritize and focus on prescribed fire projects,” the Trump administration’s “government shutdowns, a global pandemic, and Mexican Spotted Owl regulations.” Legitimate factors mentioned in the report (but glossed over in its conclusions) include “outdated training and education,” “adherence to policy,” “fine fuel accumulation — post mechanical treatment, and increased heavy fuel loading after fireline preparation.”

At one point, the review suggests, “The agency’s commitment to prescribed fire will need to be commensurate with the effort that is invested in wildland fire suppression.” Given the ineffectiveness of fire suppression in combating these so-called megafires, this recommendation reads as a thinly veiled bait and switch for doubling the Forest Service budget after the agency just received a historic budget increase.

Ingalsbee is part of the scientific consensus calling for creation of a professional workforce dedicated to expanding prescribed fire. In an interview on National Public Radio, he said he hopes the Forest Service will finally take steps to implement its stated goal of making a fundamental shift away from prioritizing wildfire suppression. “If we were to shift those resources and funding into prescribed burning, have as many crews as possible to manage prescribed burning, that would be a big help.”