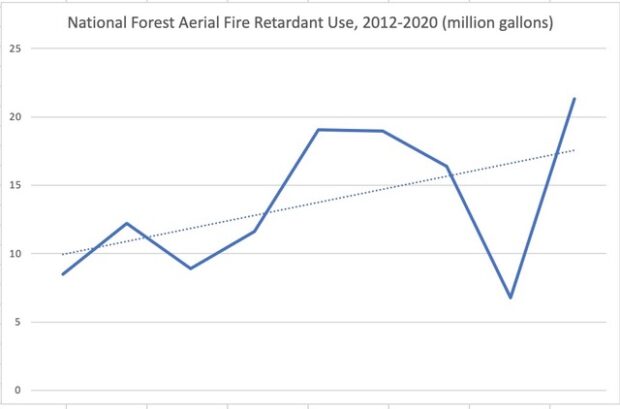 The Forest Service is supplementing its aerial fire retardant environmental impact statement that FSEEE’s lawsuits forced to be written in 2011. Those cases imposed no-drop zones around water and rare plant critical habitat. Fire retardant is the red slurry dumped from aircraft that CNN features in its seasonal “Catastrophic Fires!” newsreels.

As the graph shows, retardant use has increased 50% since 2012. Retardant is a mix of ammonium phosphate fertilizer, water, and iron oxide (the red coloring). The fertilizer is toxic to fish. Fertilizer can also damage rare plants by changing soil chemistry to favor invasive species. FSEEE won lawsuits in 2005 and 2010 that forced the Forest Service to acknowledge this ecological damage and adopt mitigation tactics, including no-drop buffers along streams.

With its re-examination, the Forest Service should now answer a key question: “Is fire retardant effective?” The data suggest not. The Forest Service measures firefighting effectiveness by its “initial attack success rate,” i.e., the proportion of ignitions that remain smaller than 300 acres. Year in and year out, the Forest Service proudly claims 98% success in keeping fires small.

But as I learned early in my career, many ignitions will go out on their own before growing to 300 acres. My Colorado ranger district’s first “let burn” fire smoldered for 3 months in subalpine tundra before winter snow extinguished it at about 5 acres. Forest Service records show that the majority of fires remained small before the era of active firefighting. Simply explained, lightning tends to strike in the same places repeatedly, with last year’s lightning creating the “fuel treatment” that keeps this year’s strike from sparking a large fire.

Science’s gold standard for measuring treatment effectiveness is the “with and without” controlled experiment — give half the patients medicine while the other half receive a placebo. Then, compare the difference in measurable outcomes.

Every year, the Forest Service does a natural experiment. In about half the ignitions where retardant is prescribed, none is available. It would be simple for the Forest Service to compare outcomes, but it refuses to do so. The Forest Service emperor would rather parade naked than admit his CNN highlight reel is a meaningless PR exercise.