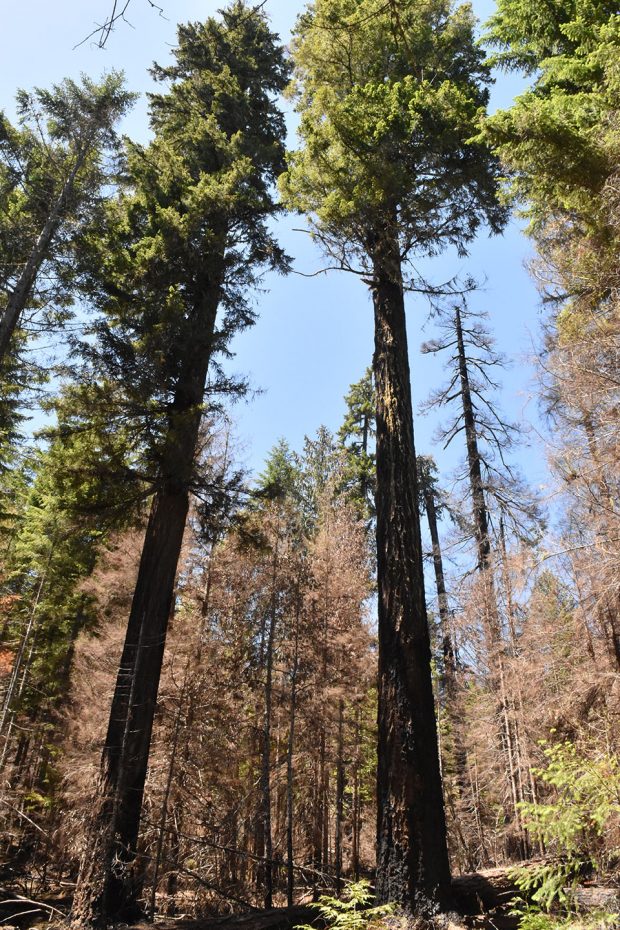 Even though these large trees in Willamette National Forest clearly are not dead, the Forest Service classifies them as "hazard trees" to justify closing the forest and logging the trees.

Zach Urness with the Salem Statesman Journal reports that the Forest Service plans to reopen “some of the 170,000 acres” that were closed following Oregon wildfires that burned in 2020. The article indicates the Forest Service is “implementing a new plan for removing ‘hazard trees’ along forest roads, after the previous plan was blocked by a lawsuit.” The areas in question were burned by the Beachie Creek, Lionshead, and Holiday Farm fires.

FSEEE filed the lawsuit that halted the so-called hazard tree logging project in Willamette National Forest when Judge Michael McShane ruled against the Forest Service and issued an injunction. That same lawsuit demonstrates the lack of rationale for cutting trees in the name of public safety.

The Statesman Journal reports that Willamette National Forest Supervisor Dave Warnack said he would “reopen a variety of areas, lifting closures completely in some places while reopening others to foot and bicycle use only. … “Our intent this year is to get some of these special places opened back up in a responsible way.”

The Statesman Journal quotes FSEEE Executive Director Andy Stahl: “The risk of being hit by a falling tree is so small that it doesn’t come close to justifying these massive closures.”

Andy’s position was backed up by testimony from Dr. Travis Heggie, former public risk management specialist for the National Park Service, as part of our lawsuit. As Dr. Heggie testified, “Across all federal lands in the United States, 1% of fatalities suffered by the visiting public are caused by falling trees.’ Meanwhile, 40% of backcountry deaths result from people falling, mostly while hiking.

Warnack told the Statesman Journal that it’s likely to take 5-6 years for the national Forest to return to “anything resembling normal” and offered few details about what areas would be open and by when.

The new Forest Service plan for hazard tree removal will include a full environmental assessment, Warnack said, adding that the new plan will be more specific about the justification for removing hazard trees along specific roadways.

Fire Truth, FSEEE in the News