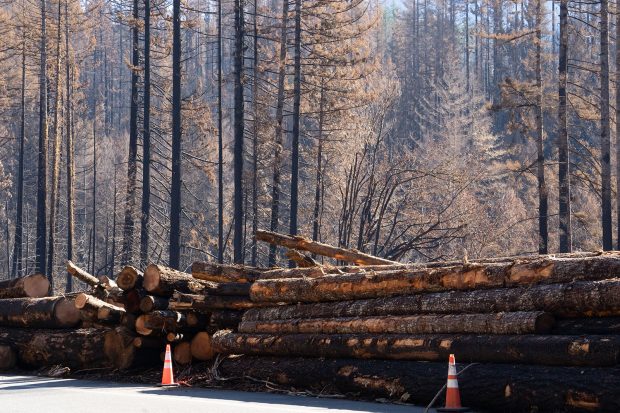 As reported by the Statesman Journal, FSEEE has filed a lawsuit against the Forest Service over a commercial logging plan to harvest at least 15,000 acres of so-called “hazard trees” along 404 miles of roads in Willamette National Forest in Oregon.

The project would allow trees within 200 feet of roads to be cut in the areas burned by the Lionshead, Beachie Creek and Holiday Farm fires in 2020. The Forest Service claims the trees need to be removed in order to reopen public lands that have been closed since September 2020.

“Their plan is essentially blackmail,” FSEEE Executive Director Andy Stahl told the newspaper. “They’re claiming the forest is this extremely dangerous, mortal hazard right now, which it isn’t. And then they’re saying, ‘Let us cut all these trees or we won’t allow you back on your own public lands.’ … The risk of being hit by a falling tree is so small that it doesn’t come close to justifying these massive closures and it certainly doesn’t justify cutting thousands of trees critical to birthing the next generation of a healthy forest,”

The Statesman Journal article also quotes Dr. Travis Heggie, former public risk management specialist for the National Park Service: “Across all federal lands in the United States, 1% of fatalities suffered by the visiting public are caused by falling trees.” Falling while hiking or climbing is the leading cause of backcountry deaths at 40%, he said.

“If the Forest Service were serious about public safety, they’d ban mountain climbing,” Andy said. “Risk is part of the outdoor experience,” whether the forest has recently burned or not. “Trees fall across forest roads all the time — there are roads festooned with trees that blew over in windstorms and they never close those roads or the forest.”

Andy told the newspaper that cutting some dead trees around campgrounds and along state and federal highways makes sense, but on remote forest roads, the risk is so small that neither closures nor “hazard tree” removal logging make sense. “Instead of this nanny state solution of locking people out of their public lands until they’re able to cut down trees that may fall at some point in the future, they could just put nice little signs that say, ‘Danger: Watch out for dead trees. … “People use national forests at their own risk every day.”

Oregon State University forestry professor James Johnson told the newspaper that fire-killed trees are more likely to fall than live trees but admitted, “The most important variable is how much use by the public the area around the tree gets. … The danger of a fire-killed tree injuring or killing someone in the middle of the Three Sister’s Wilderness is so small we don’t need to spend any time thinking about it.”

As Andy told the Statesman Journal, FSEEE plans to file another lawsuit contesting all of the current Willamette forest closures as illegitimate.