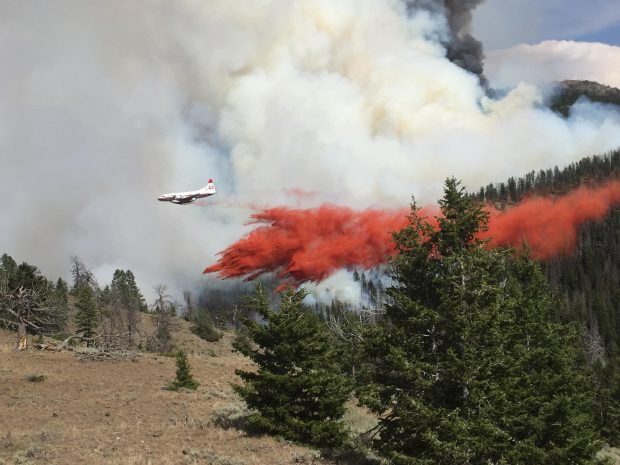 Autumn Spanne with Environmental Health News recently spoke with FSEEE Executive Director Andy Stahl about the increasing use of fire retardant in the western U.S.

Spanne’s article cites a significant increase in aerial wildfire retardant use — 90 million gallons applied on Forest Service lands from 2000 to 2010 compared to 102 million gallons used between 2012 and 2019, the latest year for which records are available.

Spanne also mentions FSEEE’s lawsuits asserting that the Forest Service was violating the Endangered Species Act and the National Environmental Policy Act by not analyzing the environmental impacts of aerial wildfire retardants.

As a result, “in 2008, a federal judge ordered the Forest Service to avoid retardant use in ecologically sensitive areas. The Forest Service was required to conduct an environmental impact study and consult with the U.S. Fish and Wildlife Service (FWS) and the National Marine Fisheries Service (NMFS) about the retardants’ effects on critical habitat.”

The Forest Service subsequently published an environmental impact statement (EIS) concluding that aerial retardant use poses some risk to species whose habitat is limited to small areas and to water quality, including the risk of toxic algae blooms.

Andy told Spanne that he wants to see fire agencies shift away from reliance on aerial retardants. “Every intrusion into buffers and waterways comes with ecological consequences, he said, particularly in smaller streams. ‘If you take 3,000 gallons of retardant and drop it in the Pacific Ocean … the concentration of ammonia in the ocean will be minuscule. Drop the same 3,000 gallons in a small mountain stream and you could have real problems.'”

Spanne describes firefighting efforts in August at the Caldor fire near Lake Tahoe, where “for days aerial crews dropped fire retardant from planes, aiming to slow the fire’s progress and lessen the intense heat so that ground crews could approach. But the fire just kept coming — until winds shifted and smoke-clogged Tahoe was spared.”

In other words, the fire retardant proved ineffective.

Spanne also spoke with Tim Ingalsbee, a fire ecologist, former wildland firefighter, and director of Firefighters United for Safety, Ethics, & Ecology. Ingalsbee agrees with FSEEE’s position that “state and federal fire agencies should be more restrained and targeted in their use of retardant. ‘The price of just one air tanker load of retardant can fund so many more workers … They’re much more flexible and nimble and versatile than that air tanker, which has one single function.'”

Ingalsbee also agrees with Andy that firefighting agencies should concentrate more on fireproofing homes and creating defensible space so that fires can be allowed to burn (as they have for millenia) without threatening lives and property. “That means clearing flammable vegetation within 50 feet of homes and investing in construction materials — like concrete siding and non-flammable roofing and shutters that protect homes against flying embers.”

“As we have this greater frequency of wildfires, we’re going to see more and more fire retardant applied, and then we need to really better understand what the potential health implications may be there,” said Kent Pinkerton, who directs the Western Center for Agricultural Health and Safety at University of California – Davis.