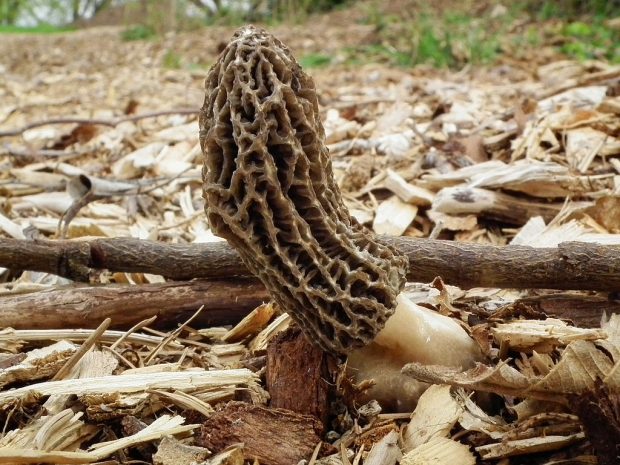 “It’s hard to say how big the fruiting will be, but I suspect it’ll be substantial,” David Pilz told the Statesman Journal. Pilz is a local forest mycologist and mushroom expert. Fire morels “have a unique lifestyle strategy,” he said.

This particular type of mushroom can live in the soil for decades without ever fruiting — i.e., sending shoots above the soil surface. “After a fire, the burn releases a flush of minerals into the upper soil and organisms are killed by the heat,” Pilz said. “The morels’ strategy is to quickly colonize that upper layer of soil to get all those nutrients. They end up fruiting in big masses in the spring.”

“Morels are finicky,” Pilz said, making it difficult to predict when and where they will fruit, but they tend to fruit most abundantly in the first year after a fire. In the second year, there’s about 50 percent less, and by the third year there are even fewer.

But almost all public lands in northwest Oregon where fire morels might be fruiting are closed, and getting caught in a closure area can bring a fine of up to $1,200.

Joanie Schmidgall, spokeswoman for Willamette National Forest, said, “First and foremost, the closures are in place for public safety, and they are hard closures,” according to the Statemen Journal. “There are a lot of hazards in a burn area, especially in the first year following a fire. The most imminent hazard is from dead and fire weakened trees. We’re working hard to remove hazard trees from roads and trailheads, but it’s going to take some time because the fire impacts were so widespread.” Schmidgall added, “Completing this work will allow a closed area to open again.”

But FSEEE Executive Director Andy Stahl is among the critics who think the closures are unjustified, “locking people out of public forest where safety is never promised and robbing the right to take part in a once-a-generation mushroom bonanza.”

As Stahl told the newspaper, “We don’t shut down the Cascade Mountains during high avalanche danger, close off the forest when there’s high winds or lock up the beach when there’s high waves,” he said. “If we cared about saving lives, we’d close the summit of Mount Hood, which is far more dangerous. We’re choosing to accept risk when we go to wild places. Why can’t mushroom hunters accept the risk?”

Stahl added that, legally, a person cannot successfully sue the Forest Service if they are injured by a falling tree. “The Forest Service management plans create no legal duty to provide for public safety.”