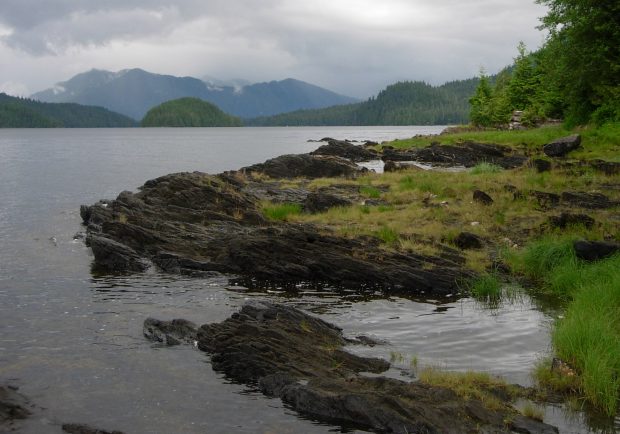 In the early fall of 2018, Marina Anderson sped down the rough road connecting one side of Alaska’s Prince of Wales Island to the other. She had only a few hours to get to a public meeting over the potential opening of the Tongass National Forest, her tribe’s ancestral land, to logging and mining.

Mail is delivered by floatplane once a week to the Organized Village of Kasaan’s tribal office on a rugged island in southeast Alaska. But the mail can be delayed for a week, or even a month, by high winds and rough waters. Anderson, who was then working as a tribal office assistant, had opened an important letter barely in time: The U.S. Department of Agriculture had notified the tribe of a public hearing, to be held that very day, on whether to remove Roadless Rule protections from the Tongass National Forest. “We were blindsided by it,” Anderson, who is now Kasaan’s tribal administrator, said recently.

In the end, Anderson and the tribal official she went with made it to the meeting and were able to hear directly from the Forest Service and speak with the other tribes present. Still, Anderson’s experience exemplifies the federal government’s long-running failure to adequately work with tribes. Alaska’s petition to the Forest Service to increase logging on the Tongass was the latest move in a two-decade battle, including policy changes, court decisions, appeals and injunctions, over the protection of 9.4 million acres of the world’s largest unfragmented temperate rain forest. In response, at the end of July, 11 Southeast Alaska Native tribes, including Kasaan, petitioned the USDA, the agency that oversees the Forest Service, requesting a new rule that would require it to work with tribes to identify and protect parts of the Tongass that hold life-sustaining value for the Tlingit, Haida and Tsimshian — old-growth red cedar trees, which are used for canoes; salmon watersheds; and lands with traditional fish camps and burial sites.

The July petition to create a “Traditional Homelands Conservation Rule” represents a new strategy in tribal nations’ ongoing efforts to hold the federal government to its legal responsibility to consult with them on projects that impact them. If the USDA accepts the petition, it would create a mechanism to involve the 11 tribes in the conservation and management of their ancestral lands — something that’s increasingly critical as climate change shifts the wildlife patterns and habitat that so many remote villages, including Kasaan, rely on.

THE TERM “TRIBAL CONSULTATION” oozes bureaucracy, but it is a primary process by which tribal nations can influence projects that will affect them by interacting with the U.S. on a government-to-government basis. The process is a way to acknowledge that tribes retain a relationship with ancestral lands, including those beyond reservation boundaries. “It’s an opportunity for an affected government — not just a stakeholder — to have a say in what happens,” said Natalie Landreth (Chickasaw Nation of Oklahoma), senior staff attorney at Native American Rights Fund. “These are very real rights.”

But the United States has not always consulted with tribes in good faith. The construction of the Dakota Access Pipeline, the designation (and un-designation) of Bears Ears National Monument in Utah, and the construction of the U.S.-Mexico border wall through Kumeyaay, Tohono O’odham and other tribal lands all represent federal decisions made with little or no tribal input.