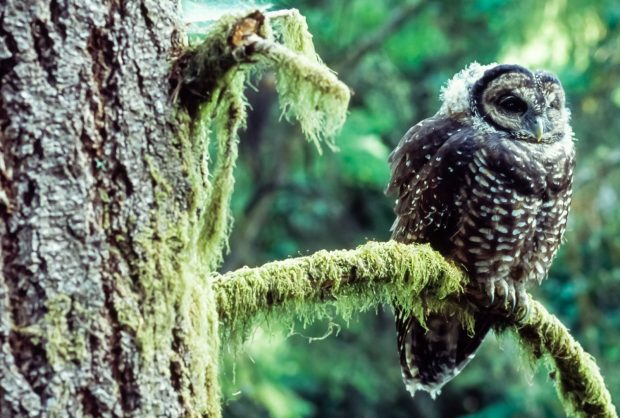 The U.S. Fish and Wildlife Service proposes eliminating about 205,000 acres in Oregon from the northern spotted owl critical habitat designation. The reduction would apply to Bureau of Land Management lands, where officials have said that eliminating “unnecessary regulatory oversight” would benefit timber management.

According to the FWS announcement in the Federal Register, most of the acreage proposed for removal from the critical habitat designation has been identified by the BLM for commercial timber harvest. The announcement also claims the benefits of the proposal “outweigh the relatively minimal benefit of retaining these lands as critical habitat.”

Noah Greenwald, endangered species director at the Center for Biological Diversity, takes issue with the FWS proposal: “Owl populations continue to decline, and this beautiful raptor can’t afford to lose even one more acre to logging” (Greenwire, Aug. 10, 2020).

The northern spotted owl was listed as threatened under the Endangered Species Act in 1990, sparking the ongoing debate over the owl’s critical habitat. Since the owl’s habitat is old-growth forest, the debate tends to pit timber companies against conservationists.

In 2017, a three-judge panel of the U.S. Court of Appeals for the District of Columbia Circuit ruled that timber companies could challenge the 2012 designation. Judge Brett Kavanaugh, now a Trump appointee to the Supreme Court, sat on that panel. He wrote, “The critical habitat designation means that a huge swath of forest lands in the Pacific Northwest will be substantially off-limits for timber harvesting.”

The FWS critical habitat proposal is open to public comments through Oct. 13. Comments can be submitted electronically at https://bit.ly/nso-habitat or by U.S. mail to: