The Water Tap: Waging the war against wildfire with water 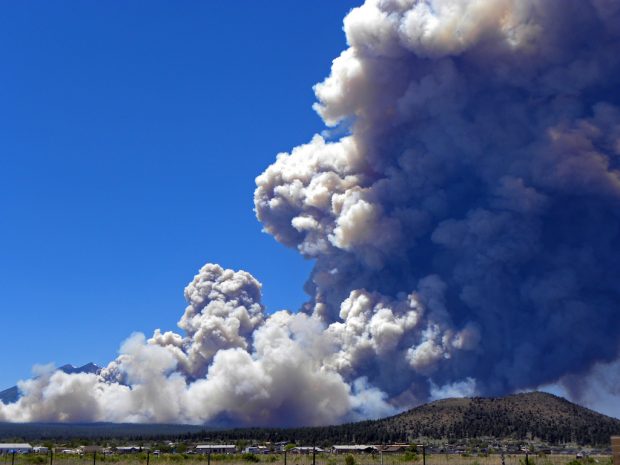 If you’ve spent any time in the west this summer, you’ve seen the skies fill with smoke from wildfires, prompting thousands of firefighters to be called to the front lines to fight the flames. One of the tools in their arsenal is water, of which the West is in short supply, particularly in the late summer months.

So, how much water goes into fighting western fires whilst we fret over the future supply of our local drinking water? According to Mike Melton, the Division of Forestry, Fire and State Land’s fire management officer for southwest Utah, three major fires in Washington County in July were responsible for drawing 765,090 gallons of water from local reservoirs. …

Of greater concern for water systems might be the volume of fire retardant dumped from air tankers ahead of growing fires to slow progression of the flames. … The three aforementioned fires received aerial dumps of 329,965 gallons of fire retardant. …

“We know it’s toxic to fish,” said Andy Stahl, the Executive Director of Forest Service Employees for Environmental Ethics. “We also know it does migrate, especially on rocky soils. You guys don’t have a lot of soil in southern Utah, you have rock. It definitely runs off of rock into creeks.”

The retardant is made up of ammonium phosphate, which is a fertilizer, and iron oxide, which Stahl says is mostly harmless and gives the liquid its pinkish hue so pilots can see where it has already been dropped. When placed on land where it is supposed to end up, the fertilizer can be a boon to young plants just starting out after a blaze, though, unfortunately, that applies to invasive plants too. But, because making precise drops of thousands of gallons of liquid from a plane is not easy, too often it ends up in waterways where it harms aquatic life.

“It’s not easy flying one of these retardant planes through smoke, over mountainous landscapes and putting the stuff exactly where you want it without killing yourself,” Stahl said. “Five retardant pilots have died this year.”

The hazards to pilots and fish alike, combined with what Stahl says is a total lack of evidence that fire retardant is even effective against fires, are arguments to cease using aerial retardant drops entirely. It also runs about $2 per gallon of taxpayer money.

“In this war against fire, is retardant a useful weapon? There’s no evidence that it is,” said Stahl. “We keep using retardant because it looks good on CNN.”