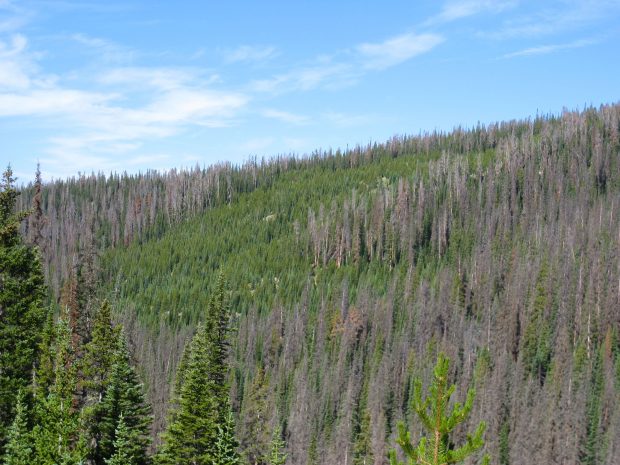 Gov. Mark Gordon signed an agreement Aug. 25 with the U.S. Department of Agriculture that gives the state more say in “active management” of national forests in Wyoming including logging, firefighting and invasive weed control.

Critics immediately panned the agreement as a tool for increasing timber sales and agricultural use, redirecting national resources toward short-term local gain and restricting public participation. The state’s leaders hailed the pact, saying it would improve forest health and increase local control.

The three-page Agreement for Shared Stewardship outlines how the state and U.S. Forest Service will identify priorities and work to combat insect infestation, wildfire threats, invasive species and to improve degraded range and watersheds. The “new approach” to forest management seeks to find common ground between local and national goals.

“Everyone wins when we work together,” Secretary of Agriculture Sonny Perdue said during the announcement and signing of the agreement in a Zoom meeting. Gordon, U.S. Sen. Mike Enzi and U.S. Rep. Liz Cheney welcomed the agreement. …

The initiatives won’t reduce wildfires as promised, said Andy Stahl, Executive Director of Forest Service Employees for Environmental Ethics. “Gardening the West’s arid landscapes, as envisioned by stewardship agreements, is unlikely to make much of a dent in wildfires,” he wrote in an email.

It would take a lot of expensive work, at $1,000 an acre minimum, to reverse 100 years of flammable weed invasions caused by road-building and livestock grazing. Shared stewardship agreements result in logging the big fire-resistant trees that are replaced with “flammable thickets of small trees,” he wrote.

“Billions in fuel treatments have been spent so far with little, if any, return on investment apparent,” Stahl wrote. He pointed to “today’s wildfire headlines” as the proof in the pudding.

Instead, “building and maintaining Firewise homes would make a much bigger dent in residential home losses to wildfire,” he wrote.