Another 76 mountain goats have left the Olympic Peninsula in Washington state as wildlife managers continue their efforts to move the invasive ungulates to the North Cascade mountains. 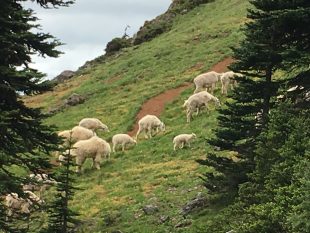 The animals were lifted by helicopter to staging areas on the peninsula, then transported in refrigerated trucks to remote locations in the Cascades. The goats are native to that range but their populations have dwindled from decades of overhunting. The relocation effort is being conducted by the Forest Service, the National Park Service and the Washington State Department of Fish and Wildlife.

Thirteen goats died during the latest relocation effort, which lasted two weeks and ended last Friday. Five died during capture efforts, three were euthanized for health reasons and one died in transit. Four animals were killed because they couldn’t be safely captured. An environmental impact statement allowed for lethal removal of some of the goats.

Mountain goats were introduced to the Olympics in the 1920s by hunting enthusiasts and reproduced rapidly. They are commonly sighted there, often moving in herds. They can be a danger—a large goat killed a visitor to Olympic National Park in 2010. Mountain goats crave salt, but there are no natural salt deposits on the Olympic Peninsula so they often seek the mineral from human urine and sweaty packs and clothing.

The relocated goats were released in areas of the Mt. Baker-Snoqualmie and the Okanogan-Wenatchee national forests.

Rich Harris, a Washington State Department of Fish and Wildlife manager who specializes in mountain goats, praised the efforts of agency managers and wildlife volunteers.

“All have worked tirelessly to give every goat the best possible chance at a new beginning in native habitat,” Harris said. “In future years, we hope to be able to look back with the satisfaction of knowing we helped restore this wonderful species where there are currently so few.”