FSEEE Weighs In On Fire Retardant

In 2012, the Forest Service launched a study called “Aerial Firefighting Use and Effectiveness.” The purpose was to provide an objective analysis of whether using aircraft to fight wildfires actually works. 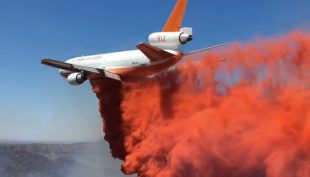 The agency spends approximately half a billion dollars each year using aircraft to fight wildfires. But there’s no solid evidence showing that the tactic actually works in putting out fast-moving wildfires in hot, windy conditions.

There’s plenty of evidence, however, showing that fighting wildfires by air is dangerous. Aerial firefighting claimed 68 lives from 2000 to 2017, according to statistics from the National Interagency Fire Center.

And there’s plenty of evidence showing that the red-tinted fire retardant is bad for the environment. The main ingredient in fire retardant is water, but it also includes ammonia phosphate, which kills fish and rare plants.

So with no evidence that the red-tinted retardant actually works, should we be using it? No, FSEEE Executive Director Andy Stahl told an Arizona news outlet this week.

“We have two concerns when it comes to fire retardant,” Andy said. “One is that it is very dangerous for the pilots that deliver it. The second is that it doesn’t work. It doesn’t actually make a difference in the final outcome of the fires.”

Andy noted that the ammonia phosphate, which is a fertilizer, carries an environmental toll, as well.

“That’s great if you want to grow corn and soybeans,” Andy said. “But if you’re trying to protect native species’ habitats, it’s not good to change the habitat.”