He rode in on a horse named Tonto. He leaves with something less of a flourish.

Ryan Zinke’s tenure as Secretary of Interior lasted less than two years. He leaves behind a legacy of slashed national monuments, freewheeling fracking and a slew of scandals that promise to follow him back home to Montana.

Zinke faces more than a dozen ongoing investigations, including one involving a land deal near his hometown of Whitefish, Montana, that has been referred to the Department of Justice for possible criminal investigation. 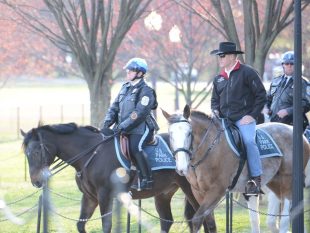 Ryan Zinke arrives for his first day on the job. Photo: U.S. Department of the Interior.

He blamed his exit on “vicious and politically motivated attacks.”

A former Navy SEAL and Montana congressman, Zinke’s departure, announced in a tweet from President Trump Saturday morning, comes just days before Democrats take control of the House of Representatives.

Raúl Grijalva, the Arizona congressman who will chair the House Committee on Natural Resources, has promised vigorous oversight of Zinke and the Interior Department he has led. Last month, Grijalva called for Zinke’s resignation. In a tweet, Zinke responded by insinuating Grijalva drinks excessively, writing “It’s hard for him to think straight from the bottom of a bottle.”

In addition to slashing the Bears Ears and Grand Staircase-Escalante national monuments in Utah, Zinke led efforts to scuttle hard-won protections for sage grouse and ramped up oil and natural gas drilling on public lands as part of the Trump administration’s energy dominance agenda.

Deputy Interior Secretary David Bernhardt, a former oil and gas lobbyist, will take over as interim secretary upon Zinke’s departure. Bernhardt has played a key roll in efforts to roll back environmental protection measures during his tenure at the Interior Department under Zinke.