With a little help, fishers are returning to the Pacific Northwest.

Last week, six of the carnivorous, cat-sized weasels were released in the North Cascades of Washington state, where they are listed as an endangered species. 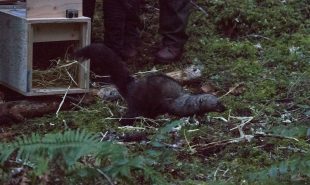 The animals, including five females and one male, were captured in Canada as part of an effort to restore fisher populations in Washington. Fishers disappeared from the state decades ago due to excessive trapping and habitat loss.

Dozens of fishers have previously been released in Washington’s Olympic and Mount Rainier national parks, as well as the Gifford Pinchot National Forest. Those populations have fared well, with several producing offspring. Working with a variety of partners, federal biologists hope to release about 80 fishers to the North Cascades in coming years.

On Wednesday, a crowd of more than 100 gathered along a trail to watch the animals dart from wooden boxes. The group included government officials, members of the media and representatives from several area tribes.

“Watching the fishers return to their native forests of North Cascades National Park Service Complex after a long absence was inspiring,” said Karen Taylor-Goodrich, the national park’s superintendent. “It was an honor to have the Upper Skagit Indian Tribe, the Sauk-Suiattle Indian Tribe, Lummi Indian Nation and Nooksack Indian Tribe attend, bringing their blessings and songs.”

The animals were outfitted with radio transmitters to allow biologists to track their movements.