Backers of a 600-mile natural gas pipeline are attempting a legislative end run around a court ruling last summer that prohibited the pipeline from crossing beneath the Blue Ridge Parkway in Virginia.

In August, a three-judge panel invalidated two permits for the pipeline, saying the project would run afoul of the Endangered Species Act and would violate legislation that designated the parkway a part of the National Park System. 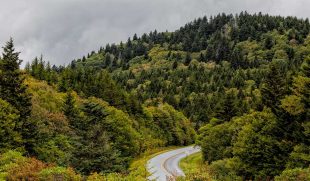 A Virginia firm wants to route a natural gas pipeline under the Blue Ridge Parkway.

A cleared corridor would be visible from the parkway, including from a scenic overlook. Language that is being considered in a Senate omnibus spending bill would allow the pipeline to cross the parkway.

Officials with Dominion Energy, the project’s lead partner, confirmed earlier this week that they are pushing for the legislation.

“Congress is considering a legislative amendment that would explicitly authorize the Park Service to grant a permit for such a crossing,” Dominion spokesman Aaron Ruby told the Richmond Times-Dispatch.

The $7 billion pipeline would carry natural gas across from West Virginia across the Appalachian Mountains to North Carolina.