The Forest Service has reopened a six-mile stretch of road and several hiking trails in the Columbia River Gorge National Scenic Area in Oregon, a year after the Eagle Creek Fire burned 50,000 acres. However, several popular trails, including in a designated wilderness area, remain closed with no timeline for reopening. 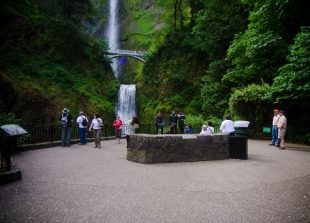 The Historic Columbia River Highway reopened on Friday, as did several trails in the vicinity of Multnomah Falls and other popular waterfalls. Federal and state officials said the routes were reopened after crews constructed protective fencing and cut down trees deemed falling hazards.

“It’s thrilling to be able to reconnect visitors with these much-loved waterfalls and trails, which were hard hit by the fire,” said Lynn Burditt, who supervises the scenic area for the Forest Service.

A Forest Service map shows that the majority of the area that burned remains closed to all public access, including a wide stretch of the Mark O. Hatfield Wilderness Area. The agency’s official closure notice says this is due to hazards “such as landslides, rockslides, falling trees, navigation issues, burned bridges, and damaged trails.”