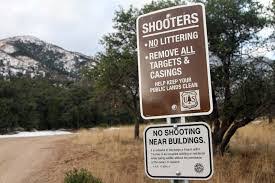 A draft decision released yesterday would prohibit recreational target shooting on 225,574 acres on the Arapaho & Roosevelt National Forests in Colorado.

The report follows a five-year process in which Forest Service officials worked with representatives from local counties as well as state officials to explore options to mitigate negative impacts from recreational shooting on the national forests.

Local residents have complained of a range of problems caused by target shooting, including concerns over public safety.

“We have worked closely with partners, interests groups and the local community to help design a draft decision that balances sport shooting, a longtime and legitimate use, with public safety,” said Monte Williams, supervisor of the 1.4 million-acre Arapaho & Roosevelt National Forests.

Release of the draft decision starts a 45-day objection period. A final decision is expected by early 2019. Implementation of the closure provisions is contingent on the development of new shooting ranges in the affected counties, according to the draft decision document.

The plan would not affect hunting where it is currently allowed.