Forest Service officials in Wyoming must reexamine their decision to let state wildlife officials feed elk on the Bridger-Teton National Forest in the wintertime, according to a federal judge’s ruling. 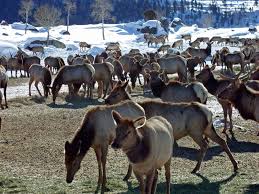 U.S. District Judge Nancy Freudenthal ruled on Friday that Bridger-Teton officials failed to take a “hard look” at alternatives to the state-run Alkali Creek Feedground, as required by the National Environmental Policy Act. And the judge found that the Forest Service improperly deferred to Wyoming wildlife officials in deciding whether to maintain the feeding program at the site.

Conservationists, as well as federal wildlife biologists, say the high concentration of elk that are attracted to the hay increases the risk of spreading chronic wasting disease, a fatal disorder that has spread in wild elk populations in the region.

“These feedlots are powderkegs for disease transmission, and with the expansion of chronic wasting disease into the Yellowstone region, the fuse is lit,” said Jonathan Ratner, Wyoming director for Western Watersheds Project. “We should allow the elk to reoccupy their natural winter ranges.”

Western Watersheds Project was one of four conservation groups that sued the Forest Service over the 2015 decision.

Freudenthal rejected the Forest Service’s claim that it lacked the authority to direct the Wyoming Game and Fish Department to not feed elk on national forest lands.

“(T)he Service’s failure to consider a reasonable range of alternatives results in the conclusion that the Service failed to take a hard look at the alternatives to the proposed action, some of which might mitigate impacts,” the judge wrote.