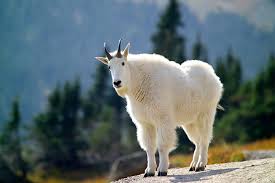 An operation to remove non-native mountain goats from the Olympic Peninsula in Washington state gets under way today.

More than 700 goats live in the Olympic Mountains, descended from a handful released there by hunters nearly a century ago. Their numbers are increasing rapidly, as are encounters with humans.

The goats crave salt, which does not occur naturally on the peninsula. Goats instead seek out salt from human urine and sweaty clothes. In 2010, a hiker was gored and killed by a large male mountain goat.

The removal project, which has been planned for several years, is being led by the National Park Service in coordination with the Forest Service and the Washington State Department of Fish and Wildlife.

Officials plan to use tranquilizer darts and nets to capture the goats. They will then be flown by helicopter to designated staging areas. State wildlife officials will then transport them in crates to the Cascade Mountains, where they are native. Goats that can’t be caught will be shot and killed.