A trailblazing wolf that has made the Cascade Mountains of southern Oregon his own is a father once again.

Yesterday, federal wildlife biologists released a video showing a trio of pups cavorting on a remote forest road. OR-7 was the seventh wolf to be fitted with a transmitting collar in Oregon; hence, his name. 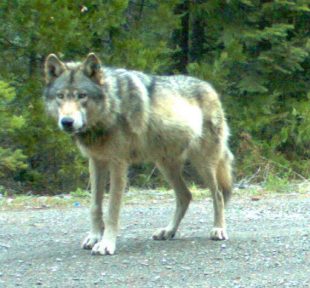 This is the fifth consecutive year that OR-17 has fathered at least one pup. The prolific wolf was born in northeastern Oregon in 2009. He traveled hundreds of miles across the state to the Cascades, becoming the first wolf to wander the western part of Oregon since 1937. His travels also took him across the border to California, making him the first wolf to visit the Golden State since 1924.

Wildlife biologists have counted 124 wolves in the state, including a pair that has recently been confirmed in the Mt. Hood National Forest.