Officials with the Bureau of Land Management will consult with the Navajo Nation before moving forward with plans to open more than 18,000 acres to oil and gas drilling in Colorado. 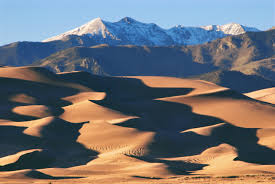 A Trump administration proposal to open more than 18,000 acres near Great Sand Dunes National Park to oil and gas drilling has been delayed but is still on the table, according to Bureau of Land Management officials.

The agency had planned to offer the tracts, which are on the doorstep of Great Sand Dunes National Park and the Sangre de Cristo Wilderness Area, during an auction scheduled for Sept. 6. Earlier this week, however, BLM officials announced they would delay offering the 11 parcels until they consult with Navajo representatives.

Some of the area proposed for drilling is within a mile of the national park’s boundary. The area is also close to two mountains considered sacred to the Navajo Nation. Last year, Navajo officials purchased 26 square miles of ancestral land in the area. Navajo president Russell Begaye vowed to “protect the beauty and sacredness of the land.”

In announcing the delay, BLM officials said the tracts still could be offered for oil and gas leasing in the future.

Officials with Great Sand Dunes National Park have expressed concerns about the proposal, saying oil and gas drilling could mar the park’s celebrated dark night skies and lead to noise and air pollution.

Conservationists and local residents share those concerns. They also worry that drilling could pollute the region’s waters.

“While we think the Bureau of Land Management did the right thing based on public pressure, we won’t back down until these areas get permanent environmental protections and public health and culture are preserved,” said Becca Fischer of the group WildEarth Guardians. “There’s really no reason to be running roughshod in a rush to frack right next to our national parks and sacred spaces.”