Every now and then, the Forest Service does the right thing when it comes to reining in irresponsible target shooting.

Kudos to staff with the Deschutes National Forest in Oregon for listening to local residents and declaring recreational shooting off limits at a site that’s next to houses and a popular recreational trail.

The Forest Service announced today that shooting will be banned in the area, which is adjacent to the Crossroads Subdivision near the city of Sisters, beginning this week. 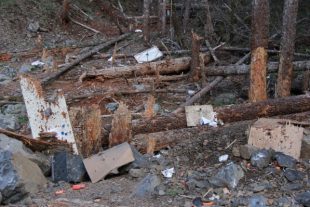 “Over the last several years complaints about irresponsible target shooting in the area and reports of close calls from stray bullets have come into the Sisters Ranger District,” the agency said in a statement.

For years, Deschutes National Forest officials tried to work with shooting enthusiasts who use the area to educate them about safe practices. As is the case with national forests across the country, most of the Deschutes is open to recreational shooting.

In announcing the closure, the agency noted that those education efforts “have not addressed the significant public safety hazards created by continued unsafe shooting practices at the site.”

Deschutes officials also said they will launch a public process to review target shooting throughout the national forest.

The Forest Service and other land-management agencies are notoriously reluctant to close areas to target shooting, in part because of intense pressure from the gun lobby and its congressional supporters. The result is often mayhem, with blasted “targets” of all sorts—appliances, cars, beer bottles, you name it—littering the landscape. Residents of adjacent communities regularly complain about dangers posed by stray bullets. And every year, target shooting sparks wildfires.

Officials with the Sisters Ranger District just showed that it’s entirely possible to stand firm against the gun lobby and put public safety first. Good for them.