A new survey shows that voters in Montana increasingly favor protecting public lands and are largely opposed to efforts by their congressional representatives to rescind protections for wild stretches in the state. 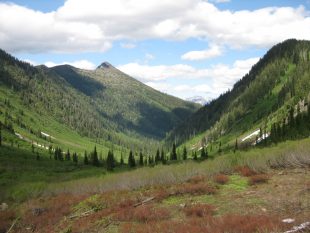 The survey of 500 registered voters, commissioned by the University of Montana, found that 57 percent of voters support protecting more federal land as wilderness. That support jumped to 65 percent when those surveyed were told that 3 percent of land in the state is currently protected as wilderness.

Support for wilderness designations in the state has grown since the university first conducted the biannual Public Lands Survey four years ago.

“This support seems to be intensifying and is driven by our frequent use of public lands and the positive economic benefits associated with them,” said Rick Graetz, a University of Montana geography professor and director of the Crown of the Continent and Greater Yellowstone Initiative.

Two professional pollsters—one a Democrat and one a Republican—conducted the survey.

The findings show most voters in the state oppose efforts by Montana Sen. Steve Daines and Rep. Greg Gianforte to rescind protections for wilderness study areas on hundreds of thousands of acres of federal land in the state.

Daines’ bill would impact about 450,000 acres and Gianforte’s bill would affect 700,000 acres. Currently, that land is managed as wilderness by the Forest Service and Bureau of Land Management.

The survey found broad and growing support for other public land protection measures, as well. For instance, 76 percent of those surveyed said they support the Land and Water Conservation Fund, a program that uses offshore drilling royalties to purchase and preserve natural areas. That’s a four-point jump from results four years ago.

A total of 82 percent of those surveyed said public lands help the economy, and 87 percent said conservation issues are important considerations when they vote.

“We are in the midst of several policy discussions right now about the long-term protection of various public lands and I think it’s a good thing to understand how voters are reacting,” Graetz said. “I would encourage all of Montana’s elected officials to take these results to heart.”