Five congressionally designated wilderness areas in Oregon’s central Cascades could be subject to a permitting system and visitor limitations under a draft plan released by the Forest Service last week.

The environmental assessment, called the Central Cascades Wilderness Strategies Project, outlines five alternatives to address the impacts of rapidly increasing visitation. The agency’s preferred alternative calls for requiring permits for overnight camping in the areas, and also implementing a permit system for all visitors at 48 trailheads. 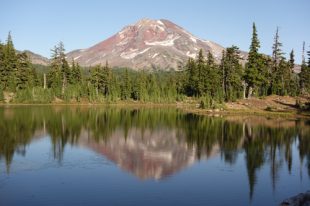 A quota system would be put in place for the most popular destinations.

“These wilderness areas provide a great diversity of outdoor recreation opportunities,” the report reads. “(H)owever, they continue to face increasing recreational demands that can degrade natural resources and impact the wilderness experience.”

Overall use of the Three Sisters Wilderness Area has increased by 181 percent since 2011, according to the Forest Service. Over that same period, the number of people visiting the Mount Washington Wilderness Area increased by 119 percent. Visitation to some of the most popular areas has jumped by more than five-fold in just the past two years.

The agency points to the areas’ close proximity to growing population bases and the increased use of social media as root causes of the spike.

“The use of social media to promote outdoor recreation and encourage more visitors to particular destinations is not likely to decrease in the coming years,” according to the assessment. “Web sites that encourage people to post photos and videos of their outdoor excursions can attract large crowds to sites that were previously relatively unknown.”

Overuse in some parts of the wilderness areas has resulted in accumulations of trash and exposed human waste, and “the destruction of vegetation and soil communities, soil compaction, erosion, sedimentation of streams/lakes, and tree damage.”

Forest Service officials will hold five open houses in coming weeks to discuss the plans, with the first taking place tonight in the city of Sisters. A final decision is expected later this year.