A subspecies of martens that lives along the Pacific Coast in California and Oregon will likely go extinct if nothing is done to help the animals, according to a study released this week.

Pacific martens once lived in coastal forests throughout Oregon and northern California. After decades of trapping, the animals have been reduced to two isolated populations on the coast. 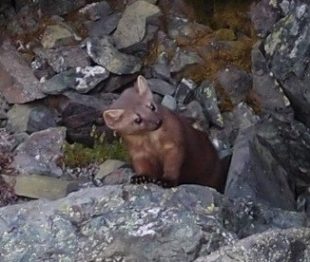 “Martens are like the river otters of the woods,” said Katie Moriarty, a Forest Service scientist and one of the study’s lead authors. “But they can be vicious little critters, too. When you capture one and it’s growling at you from inside a cage, there is no mistaking its intent. They’re the size of kittens and act like they’ll attack a pit bull.”

The study’s authors concentrated on the northernmost martens, which are completely cut off from their cousins to the south. They determined that fewer than 100 martens occupy a narrow forested strip between Highway 101 and the beach. Those martens are divided into two subpopulations on either side of the Umpqua River.

“Based on the small number of individuals in these subpopulations, our projections suggest that even a small amount of human-caused mortalities will strongly increase the likelihood of extirpation over the next 30 years,” according to the study, which was published in the journal Peerj.

The animals are vulnerable to trapping, which is still legal, and also to being run over by vehicles. The researchers trapped and collared 10 adult martens to conduct their study, and also set up 31 remotely triggered cameras.

The U.S. Fish and Wildlife Service is considering whether to list the animals for protection under the Endangered Species Act. A decision is expected later this year. For the animals to survive, according to the researchers, they would need access to more suitably forested habitat inland, mainly on the Siuslaw National Forest.

The study noted that there is a 15 to 20 percent chance of a massive earthquake and tsunami striking the central Oregon coast in the next half-century.

“Such an event would be expected to eliminate much of the forests that the central coast marten population occupies,” according to the study.