Salmon, Berries and Bears — Oh My! 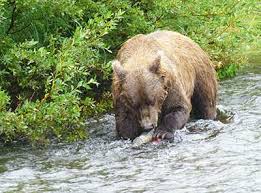 A new study shows that bears play a key role in shaping the composition of forest species in Southeast Alaska.

Does a bear poop in the woods? You bet—and that has a profound impact on the surrounding forest.

A study by researchers at Oregon State University shows that brown and black bears in Southeast Alaska are the primary seed dispersers of devil’s club, a dominant shrub in the region. Previously, scientists assumed birds were mainly responsible for dispersing devil’s club seeds.

Brown bears gulp mouthful after mouthful of the plant’s bright red berries during times of the year when salmon, the animals’ main food source, are scarce. When the salmon return, black bears take over as the primary berry gobblers.

Birds, it turns out, disperse just a small fraction of the berries.

“Bears are essentially farmers,” said Taal Levi, one of the study’s authors. “By planting seeds everywhere, they promote a vegetation community that feeds them.”

The study, published last week in the journal Ecosphere, offers an example of the interconnectedness of forest ecosystems. Bears are abundant in Southeast Alaska because salmon are abundant. And devil’s club is abundant because of the bears.

The researchers used motion-activated cameras to catch pictures of bears, birds and small mammals eating the berries. They also swabbed plants to capture DNA in residual bear saliva left on the plants.

Devil’s club berries grow in large cone-shaped clusters. Birds, the researchers found, eat an average of 76 berries at each devil’s club plant they visit. Bears swallow up to 400 berries in a single mouthful.

Rodents also play a role in propagating the plants by burying seeds they find in bear scat in caches, according to the researchers.

“This is the first demonstration of a temperate plant being primarily dispersed by mammalian gut passage,” the researchers wrote. “Our results suggest that bears are uniquely important seed dispersers, which may influence plant community composition in salmon-bearing ecosystems.”