FSEEE: The Fires Are Out, Let the People In 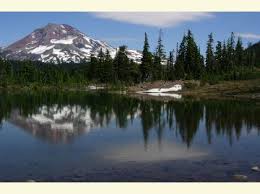 Portions of the Three Sisters Wilderness Area in Oregon remain closed to the public months after the last flames were extinguished during last year's fire season.

FSEEE yesterday filed a petition calling for the supervisor of the Willamette National Forest in Oregon to immediately end closure notices stemming from wildfires that burned last summer.

In a three-page letter to Willamette National Forest Supervisor Tracy Beck, FSEEE argues that the Forest Service is violating a policy that calls for the agency to assume that national forests are open to dispersed recreation unless they are closed for a specific and valid reason.

“(T)he 2017 fires are extinguished, thus there is no justifiable reason to bar the public from accessing its land,” the letter reads.

Forest Service officials have cited “safety” as a reason for the continued closures.

Some of the closed areas are in designated wilderness areas, which FSEEE contends runs counter to the intent of the Wilderness Act. Our position is that when people visit a wilderness area, they do so with the understanding that they are assuming a degree of risk due to the fact that they are in an area that is, indeed, wild.

“The Wilderness Act does not countenance or authorize closing wilderness to public use on the grounds that its natural state of wildness is unsafe,” our letter says.

One possible rationale for the continuing closures is that Forest Service officials are concerned trees that were killed by the fires but are still standing could pose a threat to public safety. But the closure orders do not cite any data to support that contention.

In fact, a 2014 report shows that falling trees account for less than 1 percent of deaths that occur in backcountry areas. Alcohol is a factor in about half of wilderness fatalities, the letter points out, “yet the Forest Service has not proposed banning its consumption on national forests.”

If fear of falling trees is the reason for the closures, those areas could be closed for a very long time, since most snags remain standing for many years after a fire. One study showed that five years after a fire 90 percent of snags were still standing.

Live trees also fall over, especially during high wind events, but the Forest Service does not issue closure notices when high winds are in the forecast.

“Trees fall,” the letter says. “That’s what trees do. Visitors to national forests assume the risk that at any time, without any warning, a tree may fall upon them. There is no call for the Forest Service to ‘protect’ visitors from Nature’s reality.”

Several other closures on the Willamette National Forest stemming from last year’s fires have expired of their own accord. FSEEE’s letter requests that those closure orders not be reissued.