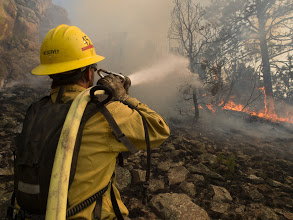 Fighting fires has emerged as the Forest Service’s top task, consuming more than half of the agency’s budget. And yet Forest Service administrators contend they do not have to conduct any environmental review of tactics used in managing wildfires, because each fire is an “emergency.”

FSEEE is working to change that. In a legal brief filed last week with the U.S. Ninth Circuit Court of Appeals, we argue that the Forest Service should follow the National Park Service’s lead and undertake a thorough environmental review of fire management policies and practices.

In the brief, FSEEE makes an analogy with emergency room physicians. Doctors do not know exactly when a car accident victim, or a patient with influenza, will come through the door. But they are ready when they do because they have practiced and prepared for those things.

“However, the doctor who shoots from the hip,” FSEEE’s brief says, “without advance planning, medical references, studies, data, (and consequently, a well-informed patient), commits malpractice and faces a high risk of bad medical outcomes. In the firefighting context, bad outcomes include old-growth forests degraded, soils compacted and riparian areas logged.”

In particular, FSEEE contends that the Forest Service broke the law when it cut a miles-long “community protection line” in the Okanogan-Wenatchee National Forest three summers ago, as an “emergency” action while fighting a fire that never came within six miles of the line.

Agency managers took the action even though the Forest Service had not undertaken any analysis of the efficacy and impacts of constructing such lines. That, FSEEE contends, is a violation of the National Environmental Policy Act.

That blaze, called the Wolverine Fire, also burned portions of North Cascades National Park. Unlike the Forest Service, the Park Service had a NEPA-compliant Fire Management Plan in place which park managers referred to as they considered alternatives for managing the fire.

FSEEE’s 13-page brief concludes by arguing that “(f)orest fires are foreseeable and inevitable. By not planning its fire response actions before ignition, the Forest Service created an ‘emergency’ wide enough to log old-growth forest critical habitat and streamside buffers, without complying with any of NEPA’s requirements. This court must not countenance such brazen avoidance of NEPA.”