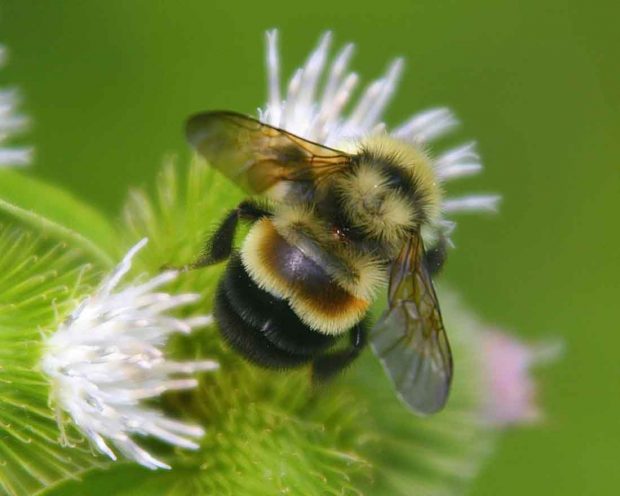 Here’s some new buzz about how bees benefit from wildfires.

Preliminary findings by a team of researchers at Oregon State University indicate that bees thrive in the openings created by high-severity wildfires.

The findings add to a growing body of evidence that landscapes scorched by intense wildfires are far from biological deserts; in fact, they are hotspots of biodiversity.

For example, recent research by Forest Service biologists found that several species of woodpeckers depend on large stands of snags left standing after wildfires. They peck cavities in the softened wood for nests.

Those cavities, in turn, are used by many other creatures as safe haven from predators. In the Pacific Northwest, more than 50 other species use woodpecker holes for nesting and roosting, according to Forest Service researchers.

Last summer, the Oregon State University team sampled 43 sites in southern Oregon that burned three years earlier in a forest fire. The sites included areas where the fire had burned at a low intensity, creeping along the forest floor and leaving trees largely unharmed. The researchers also examined sites that burned at medium intensity and stretches where the fire was most severe.

The researchers found approximately 85 species of bees—the vast majority of them in areas where the flames had burned the hottest. The findings suggest that bees thrive in burned-over areas where intense flames have killed most if not all of the trees.

Sara Galbraith, a post-doctoral researcher at Oregon State University’s College of Forestry who is participating in the study, said she had difficulty detecting that there had been a fire in the areas that burned at the lowest intensity.

“And then, when you go to some of the high-severity fire sites, it’s a completely open canopy,” she said. “There are a lot of flowering plants in the understory because the light limitation is gone. It just looks completely different.”

The researchers are conducting a second round of sampling this summer, after which they will release final papers detailing their findings.