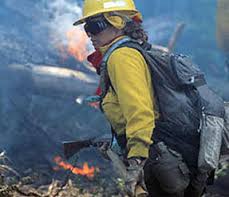 The Forest Service employs more women than in decades past, but the workforce remains predominantly male.

A 2015 study commissioned by the U.S. Forest Service’s California region found that female employees in the agency were more likely to face hostile working conditions than their male colleagues.

The McClatchy news organization reported the findings after obtaining the study through a Freedom of Information Act request.

“Concerns included inappropriate supervisor behaviors, derogatory or patronizing attitudes towards females, a lack of accountability when issues arise and a lack of respect toward subordinates,” the study said, according to McClatchy.

The 56-page report was prepared by ICF International, a Virginia-based consulting firm.

More than 1,000 Forest Service employees in California responded to a survey for the study. A majority of those—68 percent—said they agreed or strongly agreed that the agency provided “a safe, respectful work environment” for women. But significantly more men—87 percent—affirmed that statement.

The Forest Service has about 5,000 employees in California, 70 percent of them men.

According to the report, 20 percent of female employees contacted for the study said they had witnessed insulting or disrespectful remarks or behavior about an employee’s gender in the previous three years.

Nearly one in three indicated they felt excluded from decision-making and four percent said they had experienced sexual harassment or misconduct. The report said the “fear of relation is a concern for a substantial percentage of employees in the Region,” according to McClatchy.

In a statement to the news organization, Forest Service officials on Friday said that the agency “takes seriously the findings in the assessment.”

The study noted that reports of a hostile workplace for females seem to be declining over time, as younger employees fill management vacancies with the Forest Service.

“There was a trend of improvement across the region,” the study said.